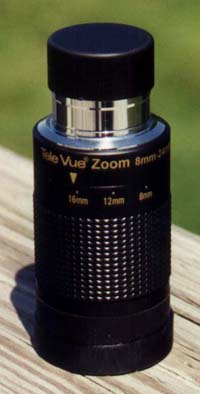 I received my new TeleVue 8-24mm zoom eyepiece yesterday, just in time for my weekly trip to the local observatory ( http://www.frostydrew.org) and the occultation of Regulus by the moon.

I'd read a lot of posts in sci.astro.amateur and found that people either loved or hated zooms in general. There are some downsides to this lens, which also apply to other zooms, such as Meade's current offering. First, the field of view is narrower than in other eyepieces, such as Plossls. The Meade 4000 ep's claim a 52 degree apparent field of view on all lenses from the 6.4mm to the 32mm. The TV zoom goes from 40 degrees at 24mm to 55 degrees at 8mm. I don't know how this compares with Meade's zoom; there's no information about it on their (notoriously under-maintained) website. I got the TV zoom for $199 ($20 cheaper than Meade's zoom) at Pocono Mountain Optics - nice folks!

There also are some contrast issues with the zoom; I don't know how many elements there are in it, but the images are a bit darker than in my 26mm Meade 4000 Plossl.

OK, that's the bad stuff. The good news: this is a wonderful eyepiece! Neither the narrow FOV nor the contrast bothered me a bit last night. The images are spectacularly sharp (I'd expect nothing less from something with the TV name on it, even if they don't make it themselves), and the zoom allows me to find the magnification I like best without fumbling around with bunches of different lenses.

The views I got last night of the moon were excellent. Just for fun, I Barlowed the zoom and tried it out. At the equivalent of 4mm (312.5x, or 89x per inch of aperture!) the moon was stunning. As one person said last night, "Geez, I can see the flag!" [from the moon landings].

Om M13 without the Barlow, I found that about 13mm-14mm was the limit of usability; beyond that the image was too dark. It's also too dark in my 9.7mm Meade 4000 Plossl. I could tell very little difference other than FOV between the TV at that setting and my 26mm Meade Plossl with the #126 Barlow.

This eyepiece really fills the gap for me between the 26mm and the 9.7mm, and does so with a tremendous amount of eye relief - 15mm-20mm depending on the setting. This is terrific compared with the 9.7mm eyepiece, which I have grown to dislike intensely. Its extremely short eye relief and low profile make it almost impossible for me to use with my right-angle finder in place.

The ETX had absolutely no problem tracking while this eyepiece was in place. Some folks really bash the ETX's drive, but I've never had a problem with mine, even with a 12mm Nagler (a real monster of an ep!) on it.

The eyepiece was also tried out in the observatory's 7" Astro-Physics Starfire, and the reaction to to it was universally favorable, even by those folks who were initially skeptical.

This eyepiece is a real winner. It'll easily become one of my most-used eyepieces!

I've had a chance to examine this side by side with a Meade Series 4000 8mm-24mm zoom lens. There are no differences in the mechanics or optics that I can discern, lending validity to the common belief that these two eyepieces (as well as Vixen's 8mm-24mm zoom) are made at the same factory in Japan and are simply branded differently. There are two differences that I've noted which lead me to recommend the TeleVue over the Meade version.