Soon after I bought the ETX, it was clear that the little tabletop tripod legs supplied were not going to cut the mustard for very long. Sure, they're cute, and they're fine if your picnic table happens to be suitably located for observing, but that's not my case!

After a false start with a Quantaray tripod, I got my current tripod - a Bogen 3011 with the Bogen 3030 pan head, which has a quick-release plate.

The name Bogen is well-known in the US as a sturdy photographic tripod, but it's really manufactured in Italy by Manfrotto. The equivalent Manfrotto numbers are 144 for the tripod and 141RC for the head.

I find this to be a very steady mount for the ETX, even in breezy conditions. I especially like the fact that I can leave the head tilted to an angle equivalent to my latitude (see my tip about doing this), and snap on the ETX. Point north accurately, and Poof! Instant polar alignment.

The head has a little brass switch that acts as a safety for the quick-release plate; when this switch is thrown back, the ETX cannot be removed from the tripod. This safety feature has saved my ETX at least once from my fumbling fingers!

One dislike I had of this setup was that the ETX's center of gravity ended up being offset from the center of the tripod. I set this offset so that it was over one of the legs, but it seemed to be a potential problem; with the center of gravity off to one side like that, it would be easier to tip the whole assembly over in that direction than any other. This didn't seem to affect the tripod's stability, but did seem like a good idea to minimize this if I could.

I read the review on Mike Weasner's Mighty ETX Website of Steven Stanford's offset plate for Bogen tripods. This is an aluminum bar with the dimensions 2.5" x 5.5" x .5" that attaches to the tripod at one end and to which you attach the ETX at the other end. This results in the ETX's center of gravity being placed over the center of the tripod. I feel a lot more comfortable with this setup, given my innate clumsiness! It's also a lot cheaper than a wedge, which usually center the weight as well. Meade's field tripod doesn't make provisions for this; with the north leg properly aligned, the center of gravity is somewhere between the two back legs.

It's been reported to me that the email address (wolfram@mail.icongrp.com) for Steven Stanford, maker of the offset plate, is no longer valid. When I tried to send Mr. Stanford a message, the email was not bounced back to me, but neither was it replied to. 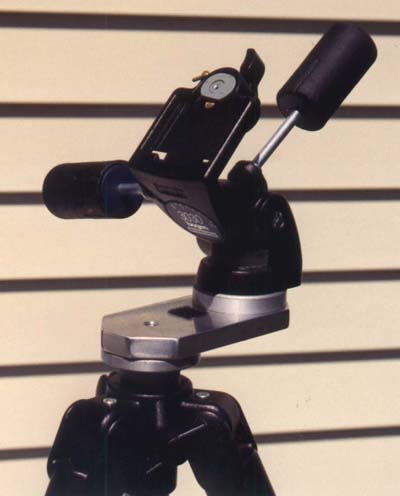 Here's a picture of the head with the offset plate. I've got a little piece of Velcro on it that holds the hand controller for my MicroStarII+ unit.

I really like this tripod/head combination! It's steadier than the Meade field tripod, and even with the Stanford offset plate is about $50 cheaper as well, when comparing B&H Photo's pricing on the Bogen unit to the list price for the Meade tripod.

Back to home page